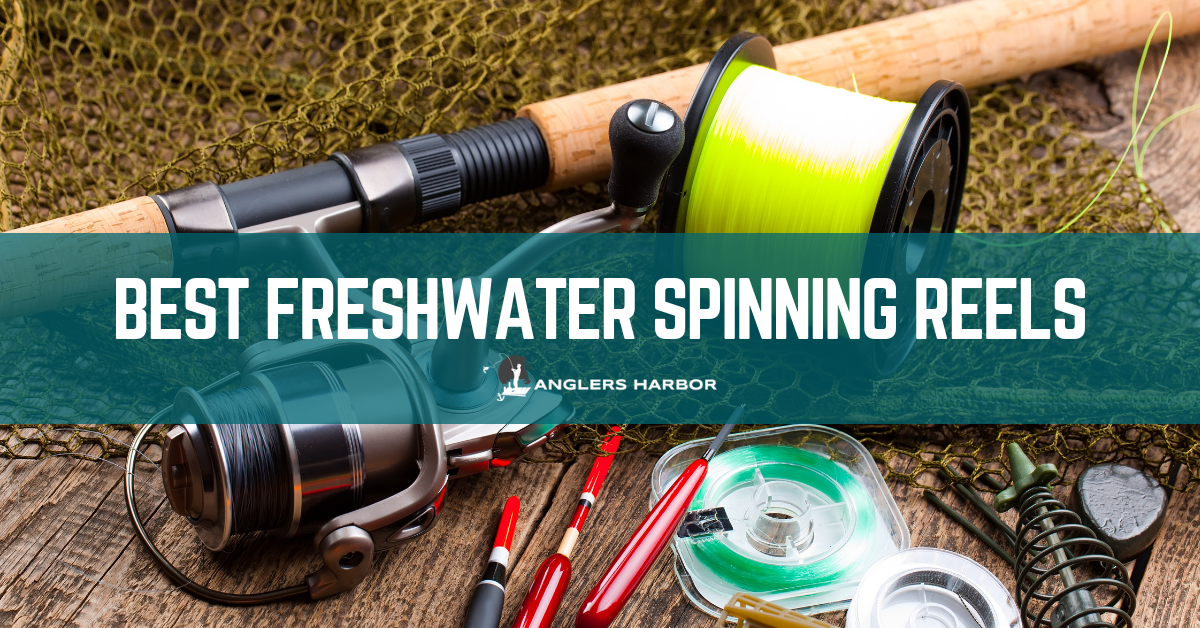 1. What's the difference between freshwater and saltwater spinning reels?

However, in that scenario, the weight of the reel can get bulky and inconvenient and it still may not be as long as you want. In that case, many people switch to baitcaster reels for their large, saltwater fishing.

2. What is "drag" in fishing and how do I set it on my fishing reel?

Drag is the amount of resistance your fishing reel gives to the line when it catches a fish before it releases and lets the line extend further out in order to keep the fish on the hook.

There is a wide variety of drags in our picks for the top 5 best freshwater spinning reels.

3. Does it matter how much fishing line my reel will hold?

Yes, it does. If you cast the far side of the river and you have a heavier line, just in case, then you will have smaller yardage on your reel.

These numbers are listed specifically on your fishing reel.It is better to have a much larger reel and to reach the far side of the river than to have to fish in the deep middle of the river where there are no fish.

You will need a reel that will hold a nice, strong line and that will be big enough to hold a lot of line. Some reels are small and lightweight, which is great for children, beginners and frequent casting, but if it doesn't hold a lot of line then it is limiting the places around the river you can fish.

You need to be able to cast a long way out so that those fish are not able to move against the horizon line and get scared away. Fish are very sensitive to these types of things.

4. Why do I need to be able to cast to the other side of the river?

Fish school around the banks of the river, looking to catch as many insects as possible. Insects are near vegetation and are rarely over open, fast-moving water. Also, near a deep cove with a big of overhanging land, the fish can catch insects without being too exposed to predators.

You fish on the banks of the river, but you don't fish on your own bank. Three big reasons:

First: you are moving around on your side of the bank and the fish can see the break in the water line and shoreline. They expect predators and swim away as fast as their little fins can carry them.

Second: even if you are set back from the shore, you will want to talk and laugh with your friends and the fish can hear you.

Third: your snacks and cokes and sunscreen and human smell can all be detected from the water by our little fishy friends.

You will want to keep your distance from the fish and cast to the opposite side of the river. This means that you're not only looking for a good fishing spot when you walk around, but you're also looking for a good spot opposite a dark little cove that is safe from land predators.

This is where the fish are most likely to be. Use a good long pole to be able to cast out further but still only have a tiny plop as your lure goes into the water.

5. Are spinning reels really better than baitcaster reels? And which one is lighter?

Baitcaster reels are lighter. They are also more expensive and more inconvenient. Use baitcaster reels for long distance river casting, heavy saltwater fishing, and for many hours of repeated casting. Otherwise, always use a spinning reel.

Spinning reels are also much easier to use. Beginners and easy, heavily frequent fishers should have a supply of spinning reels and rods for themselves and only keep one or two baitcasters, just in case.

6. Can't I just bring a more heavy-duty spinning reel to fish all freshwater fish? Is there really any point in buying a lighter one?

However, if you're looking to do more active fishing, you will want a more lightweight spinning reel that is easier to manage and not so heavy.

Now, without further ado, lets jump into our picks for the 5 best freshwater spinning reels of 2019.

Our choices for the 5 best freshwater spinning reels

The Slammer III is known for its ability to handle massive drag over and over again. This is due to its Dura-Drag system that is part of Penn's specialty products. The Slammer III is also known for being extremely watertight, so it stays smoother for a much longer period of time than some lesser models.

One small downside that users complained about was the drag tightness. They found the drag to be too tight, even on the lowest setting. This may be the model or may be a newer model. Whatever the reason, if you like your drag loose, this may not be the one for you.

The large rotator knob is easy on old, arthritic, or disabled hands, and the sleek black and gold design are impressive on the young hotshots. Users found it to be especially helpful in both freshwater and saltwater and the range of power available really showed this.

Users said that the 6500 model was overpowered for freshwater trout or bass. The larger powered ones brought in some especially beautiful prizes. One particularly epic photo showed a long-bearded man holding up an entire ocean ray. It was quite beautiful.

This is a quite affordably priced and lightweight spinning reel. All power options are less than $90 and the composite body is both attractive and super-durable. It has an air rotor which makes it more lightweight and the spool is ultra-high-grade aluminum.

The quality is due to the fact that it is made in Vietnam, a notoriously fishing-based country with an almost solely fish-based cuisine. Users found the reel to be particularly smooth and to stay smooth for months and months of fishing without starting to catch or freeze up at all.

This Okuma spinning reel is specially designed to be lightweight and still have plenty of balance. It is very reasonably priced and the purchase options are clear, with specifically delineated yard and pound designations. The gearing is elliptical and very tough.

Even though this reel is only 9 ounces, it is still a nice, sturdy, oversized construction, so it will be really reliable on the river. Users found that, even though the reel was small compared with other brands, it holds a great amount of line.

In fact, many users found the extra line ability to be really great, especially considering that they liked how small and compact and lightweight the reel was.

The only downside was the fact that, because the reel was so small, it took quite a bit of reeling to pull in the same size fish that a larger model would have made less of a spin job. That seems to be the only inconvenience it could offer, though.

The bail wire is heavy-duty aluminum and it holds up great in both salt and sand environments. But, what about for our freshwater fishing? The rotor is techno balanced and the trip ramp prevents premature friction tripping when you make a cast.

The spool doesn't require backing and it comes with indicator rings or markers which show how full your spool is so you can keep track of your line on a regular basis.

The completely metal design and watertight sealing of the reel make it great for all-weather conditions. If you like fishing in the rain or using this for ice fishing, then this is the right reel for you. Users loved that this reel comes with a super long cast maneuvering.

They felt that this was even an understatement in the advertising of it. Users also found that they dropped it, dunked, and put it through a lot and all they had to do was rinse it off and it was fine. It's resistant to water permeability was astounding and many users found the extra weight nothing compared with how heavy-duty it was.

This Shimano rear drag spinning reel is one of a kind. First, it is super affordable and easy to use by beginners. That alone makes it a good buy for many people. Second, there is a ribbed design on the side that is specifically for your index finger while you are casting.

The entire thing is made of graphite, which makes it super sensitive and extra strong. Use it with a graphite pole for an ultra-sensitive experience.

The ribbed design and rear drag capabilities make for excellent one-handed casts. This is great for people who like casual fishing, who only have one hand, and who like to flick and drop as smoothly and as fast as possible.

The rear drag is also corrosion resistant and handy when you want a smooth intake but don't want to let the line out too much. Users found that it was not ultra-lightweight, but rather lightweight in nature.

They all used it only on a lightweight rod and found that normal transportation for it was no problem at all. Even 6 1/2 and 7-foot rods were fine as long as they were lightweight, too.

Get More Info
VISIT OUR SHOP

And the Winner is... (drumroll)

The Penn Spinfisher V. This reel was listed, by far, as the toughest and most durable by users. They dropped it, dunked it, got it in freshwater and saltwater alike, just rinsed it off and kept going with it, time and time again.

The make and model of this reel make it the best freshwater spinning reel available. If you're looking for a river reel that will go through hell and back with you, apparently this is the one.

Back to fishing. Now that you know the five best freshwater spinning reels, be sure and list your own favorites below.

We want to hear from all of the fishers out there and we want to know the freshwater reels that you consider to be the best. List your preferences below and tell us your favorite place to fish. Happy Reeling!

Did you like our 5 best freshwater spinning reels review, ora are you more of a baitcast reel type of person? Check out our fishing reel review here. After you've selected the reel, you can take a look at our fishing rod review, where we take a look at some of the best crappie rods, crankbait rods, surf rods and many more on the market.

AnglersHarbor.com is a participant in the Amazon Services LLC Associates Program, an affiliate advertising program designed to provide a means for sites to earn advertising fees by advertising and linking to Amazon.com.

Scroll back to top